I'm still alive, in case you were wondering. I've just been preoccupied with life. Really, lots of things have been going on, except no sewing. I think I did so much sewing over the summer that I don't have a need to sew at the moment. That doesn't mean I don't want to sew because I do. In fact, I think I'll sew up a top today that I cut out last spring. It's a pattern that I designed using my TNT t-shirt pattern and copying this Coldwater Creek top. 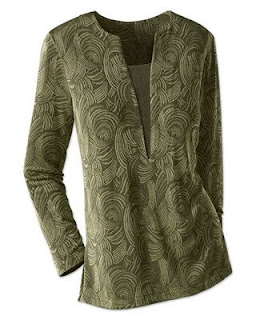 I hope I can remember how I planned to sew it together. My sewing room is a mess so I'm going to have to clean up first. Since I didn't get any work today and there is a holiday tomorrow, I'm sure I can get it done.

Another thing that has me preoccupied of late is my weight. Remember this post last January about weight loss? Last January I had decided that it was time to finally lose the weight. So what happened? I gained 10 pounds this year. I've been doing some real soul searching and decided that low calorie, low fat diets don't work for me. I've been on them off and on for years and years. And I've been getting fatter and fatter because of it. After running into a friend at an ASG meeting and seeing how much weight she has lost, I decided to try something new.

The Metabolism Miracle is a book by Diane Kress that extols the virtues of a low carb diet. As a vegetarian I have always shunned these types of diets including Atkins and The South Beach diet. However, this author makes some very valid points about excluding carbs from my diet. The most important being that my body doesn't process sugar well any longer. I'm hypoglycemic which causes me to eat way too often and always high carb foods that cause me to crave more high carb foods. This is a pre-diabetic symptom and that's a place I really don't want to go.

Since I started following the Metabolism Miracle eating plan, the hypoglycemia has totally gone away and more importantly, I'm sleeping again. I haven't had more than five hours of sleep in about five years. After the first three days on this eating plan, I can hardly stay awake after 10 p.m. and I am getting 8 hours of sleep regularly. I'm even dreaming again! What a difference getting a full nights sleep makes in my attitude toward life. I also lost 10 pounds in first two weeks. Who knew that was possible? OK, I'm sure it was all water, but still, it feels great not to be all bloated and puffy.

Because I don't eat dead animals (nor live ones!) I am depending upon soy, wheat protein, and lots of Morningstar Farms and Boca products for my protein source. I'm having to learn how to cook all over again like I did when I stopped eating meat. For now I'm not eating potatoes, rice, legumes, breads of any kind, and all fruit. Some of these high carb foods will be reintroduced back into my meal plans later, after my body gets used to not being flooded with all the sugar they introduce into my body. This meal plan puts the body into ketosis, which according to research, is what burns body fat. And I'm all about burning the body fat at the moment.

As I lose weight, I'm going to be facing a new challenge. Altering my patterns to fit the new smaller, fitter body that I'm expecting. That's a challenge I'm looking forward to.
Posted by Sherril at 8:57 AM

Thank you for visiting my blog. I would love to hear what you have to say so please leave me a comment.

Sherril
I started my blog to share my love of sewing with everyone. I began sewing in the seventh grade and haven't stopped since. My main focus is garment construction with an emphasis on getting clothes to fit. I think I'm doing a pretty good job, but let me know what you think. I may also include some of my other interests include vegetarian cooking and my family. 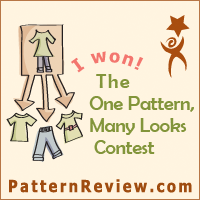 Thanks for Visiting Sherril's Sewing Saga